Lisa is Bringing Her Tour Back Home to Scotland

Following huge success from her spring UK 2016 tour, gorgeous Glaswegian Lisa Mc Hugh is ready to return to the UK on her Autumn 2016 Scotland tour. With success from the start of the year winning “Female Vocalist of the Year” for the third year in a row, Lisa is ready to “Bring on the Good Times” by bringing her tour back to Scotland, where she will be holding four shows.

Her current album “Wildfire” was released last year, and it reached number 7 on the Official Irish Charts. Hailing from Scotland, Lisa moved to Ireland a few years ago to pursue her music career, which has gone from strength to strength, and now with a band of her own, Lisa is surely fulfilling her dreams.

The talented Lisa has a new album coming out later this year. With an immeasurable amount of talent and a huge amount of backing from her thousands of fans, this album is expected to be a runner for the top spot in the charts.

Lisa has had a busy few months with dances and concerts all over the UK and Ireland and has said that she is “So excited to return to where it all began for me in September and we are kicking off in Glasgow!” The tour will be stopping off at the following venues: 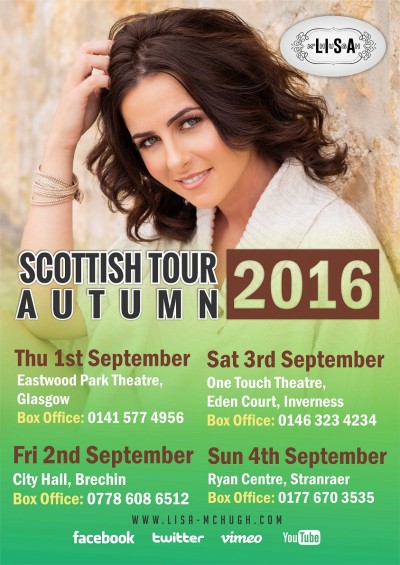