Lisa is hoping for success with Tyrone singer

Scottish lass Lisa has had phenomenal success on the country music scene and having started as a contestant on the TG4 show in 2009, she told the MAIL it was ‘an honour’ to be asked back as a mentor for the second time.

Lisa will mentor local lady, Shauna McStravock from Ardboe who has had great success in her own right and is a well known face on the local country music scene.

Lisa took time out of her busy schedule entertaining crowds at dance halls all over the country to chat to our reporter about life on the road, her new album and her hopes for success on this

“I really gained a lot of experience myself on Glor Tire and I wanted to pass that on to someone else. It is great to have come full circle from being a contestant to then

“My contestant this year is Shauna McStravock and I’m really looking forward to working with Shauna. She’s a lovely young girl and she is so talented. I’ve known her for a few years now, she has been doing a few concerts and things that I’ve been on and I’ve always kept a look out to see where she is and what she is bringing out so I thought Shauna would be a perfect contestant for this year and she is working so hard, I am so excited for her,” Lisa said.

Lisa recently released her third album ‘A Life that’s Good’ which has received rave reviews from across the country. Lisa told the MAIL she couldn’t believe it when her album charted at Number 1 on itunes only hours

“I held my launch here in Cookstown and it was released on itunes the following Friday morning and on the way home from the show I was looking on itunes and it had gone straight to Number 1. I couldn’t believe it, I had to check on my laptop when I got home to make sure it was right and sure enough it was, so I was absolutely delighted it stayed at Number 1 for quite a few weeks.”

Lisa is no stranger to our TV screens having starred in her own series entitled ‘On the Road with Lisa” on Irish TV channel 191 on Sky.

Speaking about the show, Lisa said: “About eight or ten months ago Irish TV approached me to do a show, and naturally I jumped at the chance. I had a look at what they are already producing and came up with the idea of doing a behind the scenes with the country artists. We don’t necessarily get to see the country artists at home or what they do in their spare time so I know a lot of people wanted to know that, so I wanted to capture that side of things. It was great to see an idea come to life as a TV show. I loved the whole thing and we are in talks now about Series 2 so hopefully that will happen early next year.”

Glór Tire live shows will begin on TG4 in January 2015. 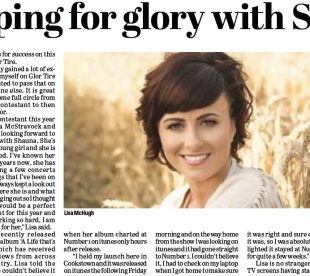