The Young Queen of Country, Lisa McHugh has done it again, with her fantastic new album, ‘Wildfire’, which is out now!

Lisa’s name is spreading like Wildfire among the households up and down the country. With an array of talents on offer, Lisa has always been destined for the bright lights of stardom – and it’s all happening now – with a new album and the airing of the second season of her hit TV Show just around the corner, the gorgeous Glaswegian shows no signs of stopping!

With 14 fantastic tracks, there is something for all tastes on Lisa’s album.  ‘Wildfire’ includes recent hit single ‘Favourite Boyfriend Of The Year’ as well as current hits, such as bonus track, a cover of the Ed Sheeran number 1, ‘Thinking Out Loud’.

Irish TV’s ‘Female Artist of the Year’ will be officially launching the album with a signing tomorrow, at Stewarts Music Shop, Dungannon and later that evening, at the Valley Hotel, Fivemiletown. Lisa will also be stopping in Drogheda, Cavan and Castlebar for signings and performances – see her below for further details! 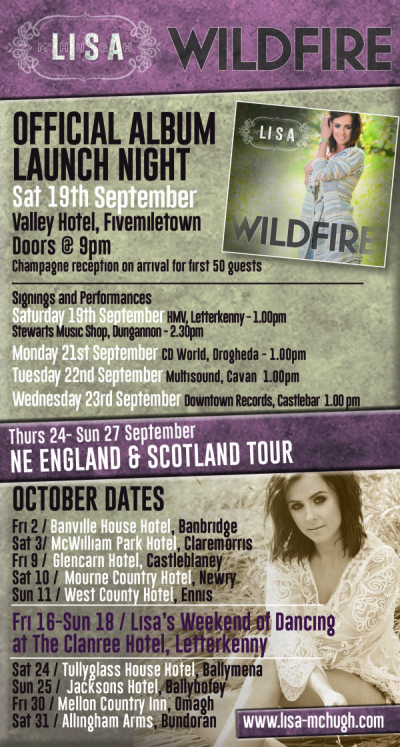 “Hopefully we will get a good turn-out at the launch night in Fivemiletown, so I can hear first hand from the fans what they think of the new album. It’s all a little daunting, but very exciting!”

Lisa has an exciting and busy few months ahead, with dances and concerts all over the country as well as the UK! Check out lisa-mchugh.com to find out when the country starlet will be taking her tour to a town near you!

The new album, ‘Wildfire’ is now on release and available in store and via iTunes.