Lisa McHugh has began the year with a flying start, after being awarded with the title “Female Vocalist Of The Year” at the Sunday World annual awards last month. This week, Lisa has released her brand new single,“Stay, Stay, Stay” from her recent album, “A Life That’s Good”.

Lisa’s album was a chart hit, and included favourites, “Apple Jack”, “Hey I’m A Woman” and “Hillbilly Girl”. Her new release “Stay, Stay, Stay” is aTaylor Swift original, and is set to be a huge hit among her fans. 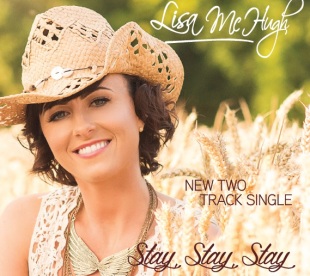 The rising star’s career has taken off over the past year, and has been going from strength to strength since she first hit the Irish country scene just a couple of years ago, after moving to Co. Fermanagh, to concentrate on her calling – country music.

Born and raised in Glasgow, Lisa McHugh is the young country star who has won over the hearts of many on her journey to stardom, especially since her TV series, “On The Road With Lisa”, which aired last year on Irish TV. The show was such a success up & down the country, and further afield, that the sky channel has decided to go ahead with another series, later in the year!

The 26 year old is one of the few women on the Irish country scene, and her fans just can’t get enough of her, filling up dance floors around the country with her own style of country music.