Born and raised in Glasgow, Lisa McHugh is the country star that everyone was talking about in 2014, and there is no doubt she will be making an even bigger impact on the nations hearts this year. Moving to Fermanagh a few years ago was a turning point in Lisa’s life when she decided to take her music career to the next level, by going professional – and what a whirlwind it has been.

Last year saw Lisa really come into her stardom, showing us her array of talents, the 26 year old is one of the only women on the Irish country scene, and is becoming more of a household name with every project she sets her sights on. The Glaswegian beauty had huge success with her third album, “A Life That’s Good”. She then proved that she was not only a singer, but an all round entertainer – with 9 weeks of TV stardom with her exclusive show on Irish TV, “On the Road with Lisa”, where her charm and individuality won over the hearts of many across the country.

Lisa has been named “Female Vocalist of the Year” four years running by the Farmers Journal, and it is not surprising as anywhere she goes, Lisa and her band put on an unforgettable show. The “Hillbilly Girl” has always been a fan of country music, and was inspired by The Dixie Chicks, Carrie Underwood and of course Dolly Parton from a young age.

“I can’t believe how much has been going on over the past year, and time really does fly when you are enjoying yourself!” said the award winning performer, “I have lots coming up in 2015, the band and I will still be on our dance tour, but we will also be doing a concert tour this year – which is really exciting! On top of that I have a few surprises up my sleeve, just wait and see!” 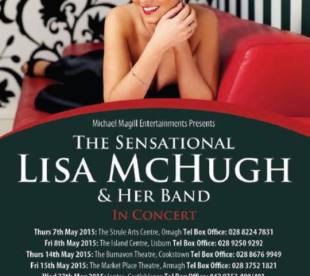 Watch out for Lisa in the dancehalls and theatres near you in 2015 – she will be putting on a show you do not want to miss!