LISA IS ‘HONOURED’ AT THE HOT COUNTRY AWARDS!

Country stars came from near and far to the Mullingar Park Hotel yesterday evening, for the Hot Country Awards, where Lisa looked as glamourous as ever! Glaswegian beauty, Lisa McHugh was thrilled last night to receive the ‘Female Entertainer’ award at the annual awards ceremony.

Born and raised in Scotland, Lisa McHugh is a young country star who has won over the hearts of many on her journey to stardom. Moving to Fermanagh a few years ago was a turning point in Lisa’s life when she decided to take her music career to the next level, by going professional – and what a whirlwind it has been.

A few years on, the award-winning ‘Hillbilly Girl’ has a huge fan base, three albums and a popular TV series – and Lisa doesn’t plan on stopping anytime soon! She’s currently recording the second series of Irish TV’s ‘On The Road With Lisa’, and will be embarking on her Concert Tour next week, which includes shows in Omagh, Lisburn, Armagh, Cookstown, Castleblaney and Enniskillen.

Last night, after the ceremony, Lisa tweeted “Absolutely delighted to have received “Female Entertainer” award at the Hot Country awards tonight! #Honoured #SoGrateful” along with the following snap, where she displayed both her award and her style. 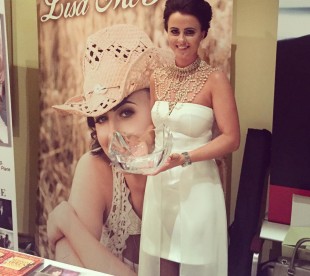 The Glamorous Princess Of Country